Interview With Janet Grace Riehl, author of "Sightlines: A Family Love Story in Poetry and Music" 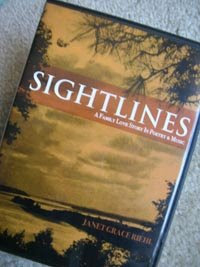 I first met American poet and blogger, Janet Grace Riehl, when we took part in the Lieurance King Article Challenge back in 2007.

We found out that we had a common interest in storytelling. And Janet had lived in Botswana and Ghana for many years and had fallen in love with the African continent, which gave us lots to talk about and debate.

And thus, our friendship grew, with the two of us guest-blogging on each other's sites, culminating in Janet's visit to South Africa in 2008 (and a stay with my family in Phokeng) while she was an enroute to Botswana.

Today I'm hosting Janet again, this time virtually, on her summer tour to promote “Sightlines: A Poet’s Diary” and audio book “Sightlines: A Family Love Story in Poetry and Music," together referred to as the The Sightlines Collection.

Win a free copy of “Sightlines: A Family Love Story in Poetry and Music.” View the featured video on Riehl Life and and leave a comment at the end of the post.

NOW ON TO OUR INTERVIEW

Damaria: Who is the Sightlines Collection of book and audio book aimed for, and what do you want them to take away from the collection?

Janet: I’m such a fool when it comes to commercial success that I never think much about audience or desired impact. It’s that funny?

In retrospect, now that both book and audio book are released, I can say that these are the characteristics of the audience drawn to the poetry (and now the music). The fans of these projects are people who love family—especially family history—as well as the sense of generational legacy going forward.

In some cases they are readers who have experienced deep loss and are buoyed by the message of spiritual reconciliation that they see as the message in Sightlines. They enjoy the straight forward approach of the story poem style I used and the controlled emotion. I could go on, but these are some common things I’ve heard from readers.

Damaria: Your sister Julia is a great inspiration to you as a poet and as a person. I love the way your poems draw a vivid picture of her, so that I am left with a wish that I had met her, and gotten to know her. Tell us more about Julia and why she remains a shining light in your life?

Janet: Julia was six years older than me. I was the younger sister, or “the baby.” That meant that Julia was always ahead of me, bigger than me, and stronger than me—by definition of our birth order. She was a force right from toddlerhood…and, frightfully brilliant. I was smart enough, but my gifts were of a different kind. I was well into adulthood before I appreciated that.

She was funny when she had a moment to be, incredibly focused in her work which amounted to an experimental physics and social justice empire around the world. In fact, she spent time training physics teachers in two locations outside of squatter settlements in South Africa.

She was tall and to the bone…stripped down in every way including what she wore and what she ate. Her metabolism ran fast. She existed on little sleep. Family and friends were important to her despite her heavy work load. She sounds like a paragon, but was all too human in her own particular ways.

Damaria: I love your father’s music, and the energy he puts into it. I also find it marvelous that at 93 he is around to pass his knowledge, wisdom, and sense of fun to the younger generation. I wish my grandfather had also had that opportunity. Is this a typical response from people who listen to your collection?

Janet: Yes, Daddy is an absolute doll as revealed on this collection. That sense of being endearing along with his complete authority seems uniquely his...but, maybe not. The family love that he’s so present here. We can see into the time that he’ll be gone and we’ll have this record of his voice and music.

You know, Damaria, on both my trips to Africa last year I traveled with the rough cuts of the audio book. When I was a bit lonely or needed company falling asleep, I listened to certain tracks where he speaks, sings, or plays. I found these comforting, like a bedtime story and rarely had to call home.

I met many of your family members when we traveled to Phokeng, a kingdom of villages where your family has lived for generations. I can see how there is that sense of knowledge, wisdom, and fun being passed down and shared in your family. It’s lovely, isn’t it?

Damaria: What is the biggest challenge you face when you work with your parent on a project?

Janet: With the poetry book it was pretty much my deal. But, I did consult Pop on points of family history. He has a bear trap mind for dates, details, and facts. His is the more literal approach of the historian. There were times I declared my right as author to use my poetic license.

With the audio book, the division of ownership was clear. I owned the poems. He owned the music. Meaning that those were the areas in which we each had absolute say-so.

In collaborating with anyone, that’s the essential fulcrum: What’s the decision-making protocol? Otherwise, people get hurt, and that’s no good. Pop is so pleased with both the book and the audio book. His pleasure is a big pay-off for me.

Damaria: You worked for five years in Africa (Botswana and Ghana), and these countries remain countries of your heart, even if they are not of your origin. How did working in these countries impact on you as a poet, as a human being and later, in your collection?

Janet: Oh, gosh. I could write a book! In fact, I am. My current project is writing a memoir Finding My African Heart: A Village of Stories. My life from 1972 when I first came to Botswana up until right now is distinctly shaped by my time there, the people I knew, and the work I did.

What was it that plunged into my heart and still holds me? Africa is, indeed, the Great Mother, the place where life was born and the place where my life was most vivid. My father feels it was my destiny to go there, but not to stay there. Strangely, I felt a sense of belonging and freedom to be myself in Africa more than any time afterwards. Perhaps I was just young and it’s my youth I cling to? Could be.

But, I feel there’s something inherent that I resonated to. There was a sense of graciousness and humanity in the places I was that is rarely shown in the modern media. I’m grateful to Alexander McCall-Smith for showing that side of Botswana. Though, I hope that now he’s introduced them, readers will go deeper.

My country background with its emphasis on matter-of-factness, basic work, and reliance on family was key in being able to slip to some small degree into the cultures where I lived and worked.

Damaria: As you know, I am very interested in capturing stories and legends from Phokeng, so that my daughter and other relations can enjoy them and learn from them. What advice would you give to storytellers like me?

Janet: In your two wonderful books for young adults—The Doll that Grew (Macmillan SA,1993) and Boitshoko (Heinemann, SA, 1996)—you reveal yourself to be an admirable story teller. Our ongoing conversation throughout the several days we spent together was like sitting around a camp fire telling stories. I loved it!

Damaria, I still recall our walk up in the old burial grounds outside Phokeng. These hills form a large part of your legend. We both felt it as a place of forgotten bones and stories that needed to be remember. We spoke of your mission for your blog Story Pot where you cook the complexities of modern African life with traditional spice.

These memories about you and your work show the primary elements needed for storytellers everywhere:

1) Have passion for your family history;
2) Have the drive and the craft to take these stories into a form that readers of whatever scope access and relate to.
3) Immerse yourself in your topic until you see with new eyes what you’ve known all your life.
Posted by Damaria Senne at 10:41 AM

It's a joy to continue our conversation on-line again.

Readers can find your 2-part guest posts on my blog magazine by Googling: Africa Culture of Story Series Riehlife. Definitely worth the journey, as Damaria is a masterful storyteller. In 2008 I visited this place of mist.

May our friendship begun in 2007 long continue.

Damaria and Janet,
Wonderful interview. It's clear you are both friends, this felt more like a chat over coffee than an interview and I loved it.

Janet, that you listened to the audio of your Dad when you were away in Africa...heartwarming.

So glad to be part of the blogtour!
Susan Gallacher-Turner
Susan's Art & Words
http://sculpturepdx.blogspot.com
http://voicesoflivingcreatively.blogspot.com