Give Away: CD by Sha-Q (R &B artist, South African) 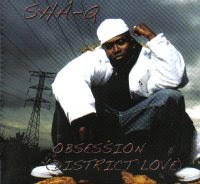 I didn't realise that one of my neighbours is an up and coming music producer. I've known him for the five and half years I've lived here and we chat quite a bit. But the question of what we do professionally has never come up.

Until this weekend, that is. He gave me a couple of CDs of one of his artists - Sha-Q - and it's quite good actually. Never heard of the musician before, though apparently he's done a lot of gigs in and around Johannesburg and other locations.

Anyhoo, I have a CD to give away. If you like trying out new musicians and like R &B and Soul, enter the give-away by taking a poll and leaving a comment on this post.

I'll announce the winner on Friday 4th September and mail the CD soon after.
Posted by Damaria Senne at 8:00 AM

Labels: Give- Away and Promotions

a bit disappointing, but turns out no one wants this DVD. Aw!