Language In A Multicultural Society 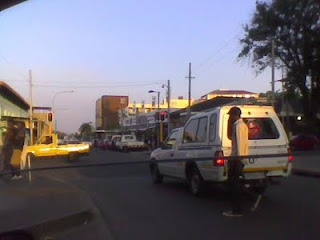 I have a new project in the works. Got briefed today and will be able to talk about it once all the papers are signed and dusted.

All I can say is that it will be my most challenging community-building initiative to date, because the people brought together will help people in crisis and it would be an honour to have played a small role in getting them and their resources together.

The OneLove campaign web site is still going strong and today we're chatting about whether couples who have been together for a long-time should use condoms and whether condom use is a trust issue or a protection issue, and Kwanda, where we give some tips on how to arrange an event to raise community awareness on an issue.

If you're a writer/aspirant writer, you can also check out the update on the campaign to encourage South Africans to read by Zukiswa Wanner.

Finished the chapter by chapter outline of the novel over the weekend. Now I evaluate the first chapter I had to see if it first the rest of the story well, and rewrite where I need to.

Yesterday I ended up in Yeoville on Rocky Street [see image of Rocky street I took].

Those of you who've heard of that Joburg suburb/been there know it has a reputation for being overcrowded and not quite safe. It's also a melting pot of immigrants from all over Africa, and I suspect that there are as many people living there who speak French as there are who speak English.

Anyhoo, while I waiting in the car for my friend ( we didn't feel comfortable just leaving the car unattended), I saw a very interesting woman. From the front, she looked very ordinary.

BUT, she wore a big sign that covered most of her back from her shoulders to her butt. The sign read: "Speak to me English. Don't speak to me in a local African language and assume that I speak it because I'm Black."

A part of me was horrified by what I perceive as aggression in the message. But, I could so relate with her, because I face the same problem daily and if I had the guts, I'd wear the same sign. Many shop assistants speak Zulu to me, assuming that I know the language because I'm Black and South African. Problem is, I only understand a smattering of Zulu from informal lessons from friends, and get really annoyed when I'm put under pressure to communicate in a language I'm not fluent in.

Usually I retaliate by speaking in my own home language. That tends to revert the conversation to English real fast, because fewer South Africans speak Setswana, and I speak the old version of the language my grandparents spoke (more like Victorian English versus modern English), so even those who usually speak conversational Setswana have a hard time understanding me. Which is why I prefer English, so we're all on the same page.

But going back to the lady with sign, I also thought her sign was more of a deterrent rather than a way to facilitate easier communication. It also made me wonder other things we unintentionally do to discourage conversation with other people.

What do you think?

Posted by Damaria Senne at 8:00 AM

Intersting question. I am sure there must be quite a few things we do to discourage conversation. Mostly probably body language, looking down etc. I will take note on what I do from now on. Nothing as obvious as that sign, that is for sure.

I had a friend from Ghana who felt the same way. She said she often felt inferior because local black people would sometimes look down on her when they discovered she couldn't speak any of our national languages other than English.

That sign wouldn't be so bad if she had worded it less aggressively. A 'please speak to me in English' would have sufficed.

I think the quickest way to discourage conversation (other than that sign) is one-word answers to questions. Sadly, if someone addresses us in a language we're not comfortable with, that may be all we can offer.

@tamara - your friend is right. people do look down on me when they find out I don't speak Zulu. some have even told me that I MUST learn the language, and there are those who have ignored me in social, or even business occassions or those who called me a coconut. Never mind that I am very steeped in my culture and am very fluent in a number of African languages; just not the one that would please them:-)
Of course there are moment when I have to smile; like the time a guy looked through me when he realised I didn't speak Zulu at a company event, and pointedly ignored my comments. Turned out he needed something from the organisation I worked for, that only I could sign off. Watched him all evening afternoon going from one employee to another and they all kept pointing him at me:-)

I think that sign is not going to help that lady integrate into society or make friends at all. Perhaps learning how to say "I'm sorry but I don't speak Zulu" or "I don't understand" in Zulu would be a better way to deal with that situation?

Wow, just read your response Damaria, it's so tough being South AFrican, if we aren't busy discriminating against skin colour it seems language is a bone of contention too! I hate the coconut distinction, it creates even more divisions and there are too many already.

Very interesting article Damaria! I think in SA it's quite complex because there are so many languages. Something I hate is when I speak in Afrikaans to someone, and they reply to me in English just because they can hear I'm not a native Afrikaans speaker. I'm also not a fan of people speaking, in my presence, in a language I don't understand. Having said this, I currently find myself in the position of trying to find people who can transcribe in French, Spanish, Portuguese and Zulu. South Africa is a melting pot indeed!