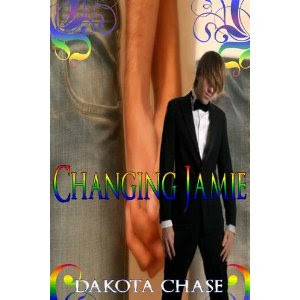 I've just finished reading Changing Jamie by Dakota Chase, and it's a sweet, coming of age/coming out story that I think many teenagers should read.

The ebook tells the story a teenaged boy who has come to the realisation that he's gay and comes out to his mother, school and falls in love with Dylan, a popular athlete at their school. Dylan does not fit in the stereotype of brainless jock, so the boy's road to finding each other and coming has no major dramas.

The story arc that interested me, and inspired me to blog about the book, is the story of Billy, Jamie's best friend who is openly gay and dates older men. It later emerges that Billy is a bugchaser - i.e. someone who knowingly and act actively tries to get infected with HIV. I'd never heard of the word bug-chaser before; even though I've been writing about HIV infection and prevention for years. I guess we never stop learning hey?

If you want to learn more about bugchasers, click here.
Buy the ebook on Amazon

P.S. If you have a teenaged child/nephew/niece/child of friend, get this ebook for him/her, even if he/she is heterosexual. It's a good book, gives lots of useful info about HIV and prevention without being preachy.

But, if you're looking for a book that gives strong insight into the worst that can happen when a gay child attempts to come out/family unwittingly finds out that their child is gay, read Hate by Martin Clement.

Hate is the story of an 11 year old boy who kissed his best friend. Five years later, he and his family are now trying to deal with the emotional devastation from that day.

Parts of the book made me cry, so keep some tissues handy. And nope, I've never met these authors and they are not paying me to say nice things about their books. They don't even know I'm writing about them:-).

Anyhoo, here are some links to online dialogues I'm currently engaged in:

READ SA - I asked authors writing in SA's other official languages to introduce themselves and their published works.
Love - stories in a time of HIV & AIDS - For those of you who watched Monna oa Motsamai, what did you think of the film?
Kwanda - Tell us about your cause. What do you want to do to help your community? What makes you choose this particular cause?
OneLove - Your partner, who you thought was with you exclusively, tells you he made someone else pregnant / your girlfriend tells you she's pregnant and that you're not the father. What would you do/say?
Posted by Damaria Senne at 11:25 AM

I have to say I find the concept of bug-chasing disturbing and strange. I like to think of myself as open-minded, but I can't quite align myself to that one. Hectic.

I also found it very disturbing. In a world where we spend billions to educate people to protect themselves from HIV, it was horrifying to learn that there are people who know what they risks are, and they choose to engage in sexually risky behaviour until they get the virus.

And Jamie, the main character in Changing Jamie also doesn't get it, and is upset and horrified by his friend's actions, especially because he always looked up to his friend as someone who was more knowledgeable and socially more sophisticated.