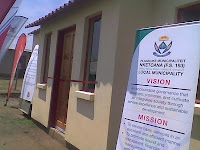 So, over the weekend I another road trip. This time my friend and I went to Reitz, a small town in the Free State, where we attended the hand-over of a new house by the Department of Social Development to a Reitz Ntekoana  resident, Mme Paulina Mokoena. (my friend work for government, so for her it was a work-related function)
It being a government event (and local government elections coming up soon), of course there was the boring political rhetoric. But the heart of the event, which made the event meaningful for me was also not lost.
Basically, for me, the event was about hope: hope for the Mme Pauline, who was so excited she was practically bouncing. Born in 1933, she is a single woman with four children and grandchildren, and in the past, they all had to pack themselves up in a tin house (see behind her in the pic). Now they are proud owner of a three-bedroom, one bath/toilet home.
The event was also about hope for the locals, who also have a strong need for jobs, real homes ( instead of shacks) and many other things that you and I take for granted.
Delivering her keynote address, Free State Social Development MEC Mantu Ntombela noted that the circumstances that led to  Mme Paulina getting the house was simply the luck of the draw.

During Free State Premier Ace Magashula’s previous visit ( as part of their Operation Hlasela), Mme Paulina had managed to tell him about her problem and need for housing, she said. The explained to him that she was growing old, and at the rate life was going, it was a sure bet she would never be able to build her own home. So government decided to present her with the house.
BUT this was only the first step, Mtombela said. Plans are underway to develop at least 150 more houses for the poor in the Reitz Ntekoana  Municipality, she said. They’re also looking to address other community needs.
I was not the only person who was inspired by the event. Thabang Mokoka, deputy director: Communications in the office of the Premier, was also inspired to give in his private capacity. He met a little boy in the crowd of revellers, whom he decided to buy school shoes for every year, until the boy finishes school.
“It will only cost me a couple hundred Rands, and I  realised that I could do something that is meaningful for the boy, but which actually does not require too much from me. In the great scheme of things, I could miss lunch and save a life,” he said.
My road trip also involved visiting two young women farmers in the Free State and spending some time chatting with them and their parents, and getting a tour of the cleanest toilets located in filling stations in the Eastern Free State. (My friend, who is a former journalist who has travelled all over the country, swears knowing where clean public toilets are in every town is a basic necessity for a journalist.  I had a more sheltered experience as a journalist I guess). But I'll tell you more about the rest of our tour, and upload more pictures, some time this week.
Posted by Damaria Senne at 12:56 PM

We are so focused on what happens in JHB and CT and Durban we forget that there is live elsewhere in the country!

What a trip! And you didn't even break down - yes?

wow that is so interesting, being so far removed from South Africa, it is interesting to see things you don't hear about around in Canada.