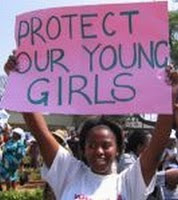 Today marks the first day of the 16 Days of Activism Against Gender Violence, a global event which takes place from the 25 November to 10 December. And I must say it’s been a very interesting time for me. It has also been a very humbling experience.

Many thanks to all the contributors who made this online dialogue a success. I’ve stopped counting the number of organisations and individual contributors, but on average, I expect to publish at least 5 new posts for the duration of the blog party. And yes, there is still time for you to participate. Email the link to your post to damariasenne@gmail.com


What is the 16 Days campaign about?

I like the way writer Moira Richards takes us back to the history of the campaign. She says: “In 1981, November 25 was marked as International Day against Violence against Women. The world adopted the White Ribbon as symbol that violence against women is just not acceptable and since 1991, the commemoration has been extended into the 16 Days of Activism against Gender Violence – to draw the world's attention to the fact that women's rights are basic human rights. Read the full post.

Sounds nice, but who needs another campaign?

Anonymous tells a very heartbreaking story of how the South African criminal justice system and the 16 Days campaign have failed her.

She says: “The slogans seem the same, the new songs that you hear only once off, the promises, it’s all the same but it’s all in vain. Men still beat their partners, there is still a large number of violence, rape cases, and statutory rapes that go unreported or are reported but the perpetrators are free.” The the full post.

Lisa Vetten, director of Tshwaranang Legal Advocacy Centre, acknowledges the bitter truth of Anonymous’s story. She says: “Particular thresholds have been established to create a hierarchy of horror, with only the most brutal of acts attracting attention and rendering the less savage ordinary in comparison. Focusing on the all-too common failures of the criminal justice system also leaves people helpless and thinking there is nothing they can do about abuse.” Lisa also offers practical advice on what we can all do to make a difference, so that 16 Days lives up to our communities’ expectations and needs. Read her article here.
Making a difference


WomensNet also highlights the fact that ‘Abused Women need more protection.” Find out why and how.
Talk about it

As I've previously mentioned, I’m currently working with Shukumisa, a national campaign which aims to get South Africans talking about violence against women and children, and specifically, about rape. Shukumisa is run by more than 26 NGOs. Here are some of their activities during the 16 Days campaign:
The Thinking Forum: The Mail & Guardian hosted a panel discussion yesterday, asking “Gender Violence: Is The Media Part Of The Problem Or Part Of The Solution?” What do you think?

In her article entitled ‘Who To Blame,”  Sarah Haken, a researcher at the Tshwaranang Legal Advocacy Centre, uses the example of the media’s handling of the Jules High School alleged rape incident to show that the media is part of the problem.

Do you agree with her? Who do you think is to blame for our children being more sexually active too early, for incidents such as happened at Jules High School?

The association for Transcriptionists and Virtual Assistants of South Africa (TAVASA) is also planning an online chat on the 1 December, from 15h00 - 16h00. Basically, members are going to talk about the challenges that women face when they are involved in an abusive relationship ( especially when they rely on their partner to support them and their children) and how starting a business online can be an important step in getting out of the abusive relationship.

Take action
﻿﻿
﻿﻿ The 16 Days campaign, however, is not just about talk and blame. Which is why a number of Shukumisa partners are visiting communities and doing practical things that can help alleviate some of the issues associated with getting help for gender violence.

For example,  Rape Crisis Cape Town is sending two busses to travel through the Western Cape, carrying volunteer trainers, community activists and counselors, who will conduct workshops, hold networking meetings, do door to door visits, train and counsel community members. This is part of the organisation's annual Stop the bus campaign.

The Women on Farms Project is also sending field officers to visit communities it serves to distribute educational materials and hold workshops as part of their 16 Days plan of action.

And don't forget - you too can make a difference.

More posts coming in the coming days. Check out the Shukumisa web site for our comprehensive, up-to-date coverage of the 16 Days campaign.
Posted by Damaria Senne at 8:00 AM

Good luck with your blogparty!

Good luck with this! I've tried to write something but I can't seem to gather all that swims through my head into a nice, non rant, piece. But I look forward to seeing what everyone else does!

Okay, I have tried. I've been trying ever since I heard about this. I even spoke to the lovely Moi. But ranting doesn't SELL the message well. Unfairly, the woman is branded as a 'bra buring feminist' (which, admitedly feeds into this very issue of which you are promoting.)

By the way, my family PA (that describes her job so much better than anything else I can think of) just showed up on my doorstep with her SIL. They are very excited about a march - they don't have internet - but were thrilled when I told them all about you.

Just to be clear, I have no issue with people burning bras. It is the fact that it is used as a negative stereotype.

oh dear, those scary bra-burning feminists... just as powerful it seems, yet alas! just as mythical as the sphinx and unicorns :-)

@moi- LOL! I suspect most people use the stereotype without actually knowing the history of its origin, or even whether the reference is true.

@tiah- You're right. A lot of the time ranting does not sell a message very well. But I believe that logic ( and being very reasonable) doesn't sell a message well either. People hear you, they understand what you say, they may even agree with you in principle, but somehow, it doesn't translate into them caring about the issue, or even stopping what they're doing if they are part of the problem.

Moi, I actually knew that. My real issue with bra burning, however, is that:
A - they are expensive
B - I am bra-dependent.

But if I actually thought it would help the cause, I would donate my oldest one to toss on the braai.