Blast From The Past: A Poem In A Popular Literary Journal (Staffrider Vol.9 No.1 1990, Ravan Press) 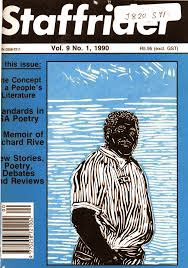 Yesterday I found out that Staffrider, a very popular literary journal that I contributed to in the 90s is now part of a digital library called Aluka.

According to their web site, "Aluka is an international, collaborative initiative building an online digital library of scholarly resources from and about Africa. ‘Aluka’, is derived from a Zulu word meaning ‘to weave’, reflecting our commitment to connect resources and scholars from around the world."

I think I'm honoured that something that I wrote is in an academic archive like that.

The Staffrider edition that I contributed to is Staffrider Vol.9 No.1 1990. It was published by the now-defunct Ravan Press. I was 23 years old then.

I think I contributed to one or two more editions, but after so many years, my mind is hazy on that. I didn't keep the clips, unfortunately.

I tried to download a PDF of the journal, just so I could reread my poem, but one needs to be logged onto the library's private network to gain access.

The library is available to educational institutions and non-profits, among others, and I don't really qualify.

But I'm going to email them to find out if they could, maybe, email me a PDF of that particular issue.

It would be nice to see the work I did half my lifetime ago.
Posted by Damaria Senne at 6:00 AM