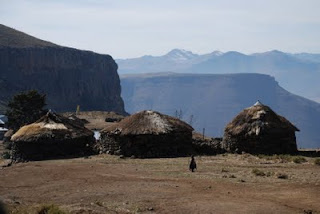 Tomorrow is Heritage Day here in South Africa, so I've decided to share about my culture, which influences my writing in many ways.

Batswana are mostly based in the North West province of South Africa and have strong ties with the Batswana people of Botswana.

History says we were the same people, and when the region was colonised and divided into South Africa and Botswana, an arbitrary border was simply put through, separating the people.

I learnt a lot about my culture in my childhood, when my grandparents, Iphapheng and Damaria Senne were still alive. As I've mentioned before, they were born way back when: Iphapheng 1889 and Damaria 1894. So while there was a lot of German influence in their lives due to religion and schooling, they still held to most of their cultural practices. 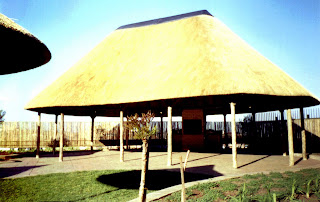 Batswana people lived in thatched roofed huts, which had hard floors smoothed over with mud and cow dung.

Outside the huts was a small wall, roofless enclosure, called lapa. The lapa was also kept clean by packing it with mud and the smoothing it over with the dung, which looked very smooth and did not smell when it was dry. [The second image is the modern version of a lapa, still very popular, today]

I remember as a child going with other children to the dam, where most of the village cattle drank water, to go pick up cow dung so my grandmother could use it. It was fun for me, and not really a job.

Batswana people usually had separate huts for cooking and sleeping. They kept their homes meticulously clean, and one of the things I learnt from my culture is to sweep and scrub/polish/shine my floors EVERYDAY. My helper also has to sweep the smooth surfaces in my yard, which I still regard as my lapa, everyday. I don't mind whether things are tidy [whether the kids leave stuff lying around, but the house has to be clean]. Drives most of my friends crazy, as they claim I have an obsession with cleanliness. 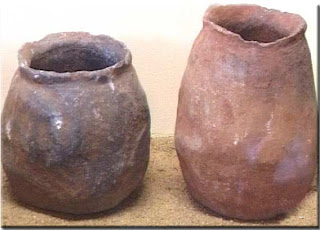 Batswana people used clay pots [image left] to cook their meals. But I never saw them in person, as my grandparents mostly used metal, three-legged pots.

Similar clay pots as these ones were also used to collect and store water, which kept the water very cool and refreshing regardless of the weather.


To laddle water, they used the dried shell of an indigenous melon whose English name I don't know. After harvesting, we'd eat the melon, and then the shell was left to dry and then later used as a laddle.

Batswana are also keen weavers, and made grass mats and bowls and baskets and other types of containers for dry goods. 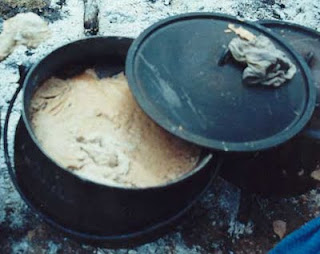 The Batswana's staple food is a brown grain food called mabele. It's currently sold in stores, and is also the basis of the breakfast cereal Maltabela.

We eat it sour - that is you ferment a portion of mebele with warm water, then when you cook it, you boil a pot of water, mix with the fermented mix, allow to simmer for about 10 minutes, thicken with dry mebele, and allow to cook until it's done [another 20 minutes].

You can eat this carb source with meat and gravy, vegetables or whatever else you want. Batswana also grew maize, but mostly ate it off the cob.

When I was growing up, there were a lot of wild vegetables and fruit that we used to pick. I used to be able to recognise a wild tomato [was green actually, not red like the tomatoes we use today] and wild onions indegenous to the region.

Our village was also packed with mochana, [don't think there's a mainstream alternative to this fruit], mmupudu [looks like a small apricot and morula [ja, that fruit that flavours the Amarula, the alcoholic drink].

I completely, absolutely refused to eat dinato [ those edible worms that thrive on morula trees] though i did eat locusts a couple of times. And my cousins did catch me a snake once to eat. And nope, it didn't taste like chicken. But it was delicious once i got over its origins.

I'm not sure if it's part of culture, or born of necessity, but Batswana people have a strong interest in growing/raising their food. The region has some of the largest cattle herds in the country, and even today, many of the people in my village grow maize and some vegetables in the Spring/summer period, when they know the rains are coming and will keep the ground well-watered. 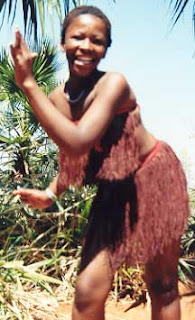 Batswana ate most of the meat from their animals, including the entrails [mala le mogodu], which made a very cheap and popular dish.

The animal skin was then used to make loin covering for men and boys, and skirt-like covering for women which were longer at the back, for older women. Young girls wore makgabe, that skirt that is made up completely of fringe.

I mostly communicate in English, even when I speak to Black South Africans, because I speak the old traditional Setswana that many young people do not use here in Johannesburg.

But in truth, I love Setswana - writing it and speaking it. I think it's a very beautiful language. And it has a turn of phrase that is very very funny. Setswana is part of the Sotho group of languages in South Africa.

Sourc for some of the images: SA Cultures
Posted by Damaria Senne at 8:46 AM

What a cool post, I love reading about Southern African cultures. I grew up in Durbs so I am mostly only familiar with Zulu culture and language, of course only what they taught us at school, which was limited!

I also grew up in Botswana and attended one year of school there, but we were never taught Setswana. The Batswana children went off to their Setswana classes and the rest of us had a free period.

I have no idea why we did not get to learn Setswana too, except maybe tht we would have been so far behind the other kids that we would hold them back!

Where abouts did you grow up?

I think it would have been cool if they also let non-Batswana kids learn the language. And I think it's very gracious of you to say they didn't teach it to you because they thought you'd hold the Batswana kids back. But I suspect it was old biases, and the assumption that because you're not motswana,you wouldn't be interested in learning the language.

I'm from Phokeng, which is a region near Rustenburg, where SA has platinum mines. Part of what used to be called Bophuthatswana. Growing up, my family divided our time between Phokeng and Mafikeng, where my father worked as a civil servant for a couple of years.

I think you may have a point there, about us non-Batswana kids and the old biases. But there was a white girl who did learn Setswana with the others... maybe it just never occurred to me to ask to be allowed to learn because I was just a lazy kid who enjoyed a free period!

great post, Damaria. I reckon it's so importnat to find a balance between hanging onto our cultures and traditions and at the same tiem learning to live in a globalised world.