Thank God It's Friday! Looking forward to a long weekend, and sleeping however long I want to, though I am planning to try to get caught up with some writing.

For those who are interested, Gideon is doing better. He still needs constant care but he's moving more energetically. 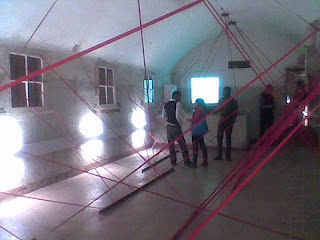 Last night I attended opening night of an art exhibition hosted by the Tshwaranang Legal Advocacy Centre. I couldn't sleep afterwards - what the people and the art said kept circling my mind over and over...

It was all very thought-provoking, but depressing, as it highlighted the journey that rape victims have to go through to get justice.

Basically, if you reported a rape in Gauteng ( and I live in the province, so the stats apply to me), only one in six of your group will actually make it into court. Others will have had cases withdrawn due to statements not having been taken, analysis of the DNA evidence not having been completed, insufficient evidence having being obtained,your docket lost and witnesses not being available. You might also have given up at this point and withdrawn the matter.

Only one in 25 will have their case result in a coviction for rape ( although 2% will see attacker convicted of a lesser crime, such as statutory rape or assault).
Posted by Damaria Senne at 9:22 PM

Those figures are shocking! Jeepers, no wonder you couldn't sleep.