The Jacarandas Are Blooming In Joburg

I love Joburg this time of the year, when the jacaranda are blooming. 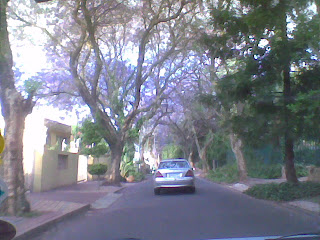 Today I was especially struck by this garden. The flowers cover the street-side portion of the perimeter wall of this home, giving passing motorists a really nice view. 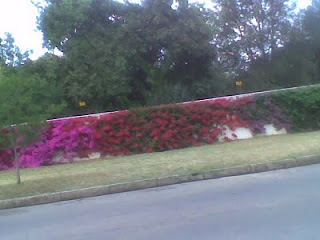 I also love the fact that Joburg has millions of trees. Some people have called Joburg an urban forest, and I once heard someone ( Paris Mashile, chairman of the Independent Communication Authority of South Africa to be exact) say that Joburg had over 6 million trees. That early in 2008, and since then, there has been a continuous drive to plant more. And for a city with a population estimated at slightly over 10 million, that's real eco-friendly.

Actually, sometimes I think houses and garden should be novel character in and of themselves, but the story would probably be dull. Unless the house was haunted and killed off my human and animal characters:-)

Question: what inanimate objects inspire you in your writing/blogging/art?
Posted by Damaria Senne at 8:00 AM

Cars. I name mine. They so have personalities!

My car is Ella (she's a Honda Jazz, so she's named after jazz legend Ella Fitzgerald) and my hubby's bakkie is Burt (because its personality reminds me of Burt Reynolds).

@tamara - LOL. Ella I can sort of understand, but what makes Burt stand out?

My main inspiration is definitely the sea. I have an obsession with the sea!

When last were you on Pretoria! It is magically beautiful here now!

Makes my drive to work tolerable!

The Jacarandas are AWESOME!!!!