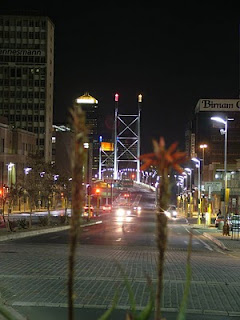 Yesterday I had a late meeting in Braamfontein and by the time I came out of the building, it was already dark. I live in a quiet area, where there is hardly any movement in my street after dark, and sometimes I could almost forget I live in a busy city it's so quiet. So it was a refreshing change to see how vibey Braamfontein is at night.

People were out in the streets, chatting with friends, catching buses, walking up and down the streets. Car stopped, coughing out more happy and busy and harried people into the street. Whatever the city of Johannesburg did to revive that area, it worked.

I realise I was watching it almost from an outsider's view, and certainly, years back when I worked in Braamfontein crime was a big problem and I don't know if they managed to reduce it. Still, this city does have a new lease of life and I like it...[the image on the left is of the Nelson Mandela bridge at night, courtesy of Braamfontein.org.za]

My morning was taken up mostly by updating current sites and writing content for new sites. I now know more about web hosting solutions than I ever thought I wanted to know. Despite the rough subject matter I was writing about, I was relaxed because I didn't have meetings or a deadline to deliver today.

I was a tad annoyed by one of the newspaper articles I read for my work on the Shukumisa site. Reading the article, I felt as if the journalist infused the issue with as much skepticism as she could manage without actually calling the girl alleging that she was raped a liar. Maybe it's all in my head, who knows? But it bugged me!

On a happy note, on OneLove I have a short article on the issues that a couple should talk about before getting married. Things like, do you have the same expectations from the marriage, on being faithful to each other or on whether to have children?

The theory being, some people encounter problems in their marriages because they had differing expectations to start with, and it's hard enough to make a marriage work when you're both pulling in the same direction, never mind when you pull to different direction!

Enjoy your weekend!
Posted by Damaria Senne at 11:46 AM

2 - The way rape is generally dealt with, the perception of, the debate of, the reporting of, the prosecuting of, the understanding of - bugs the living heck out of me. That isn't in your head.

And a Happy Friday to you too Damaria! :)

I read the IOL newspaper article Damaria and (perhaps because I'm married to a lawyer who - when I ask him if he wants coffee - says "I'll take it under advisement!") it just seemed unemotional and factual to me, rather than deliberately implying the girl was a liar. That word "allegedly" (another of my hubby's favourites!) was used a lot, which could have given the wrong impression, but could I suggest it was perhaps just factual legalese appearing cold and unemotional rather than sympathetic?

Great article on OneLove - it's so important (and so difficult!) to talk about some of those BIG issues before one gets married (finances and working wife are two others), because talking practical stuff (no matter how important) somehow seems less romantic. Maybe that's just me the idealist talking! :)
Judy

I like to hear that there is a street life goin on in Joburg, in my mind there has never been much of a street culture in the more suburban parts of SA.