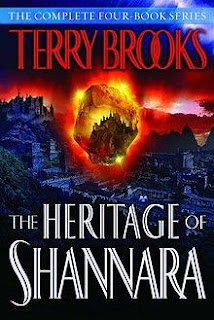 This week I was in Braamfontein to see a client, and after the meeting, I decided to pop into a bookstore in their building. Bought "The Heritage of Shannara" by Terry Brooks [the complete story in one volume, contain book 1 - book 4]. Paid R60 for it. Nice deal, hey?

The volume is made up of:


It’s the perfect gift for my younger sister, who reads a lot of fantasy and loves Terry Brooks. Now let’s hope she doesn’t get into her head to read my blog or she’ll get a clue of what I’m putting into her Christmas goodie bag:-)

Here are some of the issues I’m reading/writing/talking about today:

Read SA – What's your favourite opening line/paragraph in a novel?

Shukumisa - A special group of actors are causing a stir on local metrorail trains with a series of skits relating to social issues.

Presented by the National Working Group on Sexual Offences, the Shukumisa campaign aims to call the system and civil society into account with regards to sexual violence.

View the new 3-minute video filmed by The Mail & Guardian and published this week.

And I leave you with Atumwi, a Malawian band. Tell me what you think of them? A contact of mine promised to send me the lyrics - I like the sound, but have no idea what they're actually saying.